For the Crown expansion #1: Shock & Awe 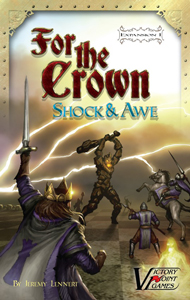 Tensions mount in the war for the crown, and both sides are turning to new tactics and strange allies. Battlefields are haunted by ghosts, buffeted by invisible forces and wracked by lightning. Armies march under the auspice of statues, and secure formations are breached by attacks from odd directions. Which side will best master these new devices and capture the enemy sovereign?

For our popular deck-building game, For the Crown 2nd edition, comes the first expansion, Shock & Awe, introducing 13 new cards and 10 new unit types to pit against your opponent. Bolster your economy with the Caravan, duplicate key assets with the Changeling, and rule the battlefield with the mighty Amazon. Who has the wit and will to lead these new forces to victory, and who will succumb to Shock & Awe?