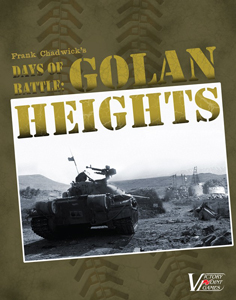 Named one of the Best War Games of 2013 by War is Boring!

The Syrian Army’s attack against Israel on the Golan Heights in October of 1973 caught the Israeli Defense Force by surprise. From the afternoon of 6 October through the morning of 10 October, the issue hung in the balance. Several times it seemed as if nothing could stop the Syrians from sweeping down into the Jordan River valley and placing all of Northern Israel in artillery range again.

Then arriving Israeli reservists gained the upper hand and in a powerful counteroffensive broke the Syrian Army and sent it streaming back across the pre-war ceasefire line. The first several critical days of that struggle are the subject of Frank Chadwick's Days of Battle: Golan Heights!