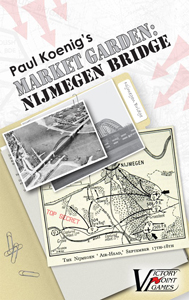 After storming the beaches in his D-Day series, and fresh from air landing in his Market-Garden series, designer Paul Koenig invites you to collect another World War 2 European Tour travel sticker, this time from the first 3½ days of the German 1944 winter offensive known as “The Battle of the Bulge.”

In this first game of a new series, 6th Panzer Army takes you to the northern sector of this famous salient where Allied forces grimly confronted a winter onslaught by Hitler’s vaunted Panzers in the rugged Ardennes Forest. As a player, you must command your German or Allied forces so as to capture the objectives on the board while keeping your casualties down (and your opponent’s casualties high).

Using a fresh take on the venerable wargaming system presented in the D-Day and Market-Garden series, Battle of the Bulge authority and game developer Randy Heller has brought Paul’s system up in scale to handle the larger operations in this campaign and provide the great (but manageable!) gaming “chrome” that wargamers so enjoy when exploring history using a “paper time machine” like Paul Koenig’s The Bulge: 6th Panzer Army.

Paul Koenig’s Market-Garden is a series of small-format, competitive introductory-level wargames covering the critical first three days of Operation Market-Garden, where the Allies attempted to seize a series of bridges in Holland and end World War 2 before Christmas. Each game in the series covers a separate bridge: Arnhem, Eindhoven, and Nijmegen. As a player, you must command your German or Allied forces so as to capture key objectives on the board while keeping your casualties down (and your opponent’s casualties up).

With plenty of decision making and Optional Rules to extend gameplay and realism, the Allied advance into Germany hangs in the balance at Nijmegen Bridge!