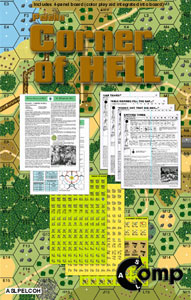 1300 hours, Friday 15th September 1944, PELELIU ISLAND: During the landing Kilo Company was on the extreme left, detailed to take the point. Love Company was on the right. Love moved inland and encountered the coral ridge, not commanding the beach like the point but still just as difficult. As Love moved inland and Kilo moved to the left a gap grew between the two companies. Kilo secured the point by 1030 hours, but was unable to link up with Love. At approximately 1100 hours, Item Company, the battalion reserve, was thrust forward between the two companies to fill the gap. The temperature had reached 115, the hazy heat simmered of the water and sand, when it was calm enough. Japanese mortars of all calibers raked the beach and hinterland, green tracers arced out the jungle to search out the Marines. Over 60 vehicles lay immobilized, on the reef and beach of White Beach one and two, many of them burning. The murderous Japanese flanking fire from the point had been silenced by Kilo, commanded by Captain Polk. After an hour of battle Item had linked up with Love but was unable to reach Kilo and a gap remained. Puller pointed to his map and in his gruff voice commanded Able Company Captain Jennings, “Captain, take your Able Marines into that gap.”

Welcome to PELELIU—CORNER OF HELLTM, a historical module depicting the 1st Marines landing at White Beach One and the subsequent battle inland.

> A set of 8 scenarios set on the historical map