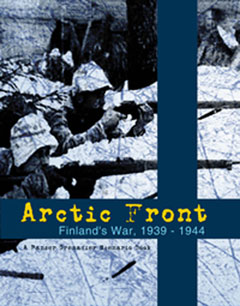 In November 1939, over a million Soviet troops began an invasion of Finland, defended by 160,000 soldiers. The Finns lacked artillery, tanks and aircraft, but made up for it with sisu — Finnish for fighting spirit. The Winter War lasted for four months, but Finns fought the Soviets again in the Continuation War of 1941-1944, and fought the Germans in the Lappland War of 1944.

Arctic Front Deluxe Edition is a Panzer Grenadier supplement adding the Finnish army to the game series. It is not playable by itself, but requires ownership of Eastern Front to play most of the scenarios, and Road to Berlin and Battle of the Bulge to play all of them.

There are 40 scenarios plus background articles and order of battle charts in a 64-page book just like the popular Sinister Forces and Fronte Russo.

There are 176 die-cut-and-mounted playing pieces. The Finns have outstanding morale and very good leadership. But their support weapons are lacking, and the Finnish side usually has very little artillery and few anti-tank guns or other such pieces.

Finland’s strength lies in her infantry, and these troops are very good indeed. Some of them actually sport anti-tank factors, representing the deadly 20mm Lahti-Saloranta anti-tank rifle. In addition to the typical infantry and machine gun platoons found in most armies the series has covered so far, the Finns also have ski commandos (the feared Sissi) and good cavalry.

Though Finland has weak artillery, the Finnish player does get a new type of transport unit, the sledge. This wagon on runners (some of which were pulled by reindeer during the war) allows fairly rapid movement over the snow, so what weapons the Finns do have will get deployed quickly.

Arctic Front introduces a brand-new unit type, one of the most unusual of the Second World War: the aerosan. Powered by an aircraft engine, this craft had a box-like superstructure mounted on four large, pontoon-like skis. An aircraft propeller mounted on the vehicle’s rear pushed it along at very high speeds over snow (the movement factors on the game pieces are deceptive, as these units pay the same costs as foot units).

The Red Army of Workers and Peasants gets some new pieces in addition to the aerosans: BT-5 and SMK tanks. The Soviet units depicted in Arctic Front’s scenarios are often of inferior quality to the Finns. With the leadership and morale wrecked by the purges of the late 1930s, the units that invaded Finland in 1939 proved sorely lacking.

Scenarios cover a wide variety of actions. There are several from the deep snows of central Finland in 1939 and 1940, where ski mobility was the key to Finnish victory. Others cover the intense actions on the Karelian Isthmus, where Soviet tanks met the entrenched Finns. Still others are based on the Finnish offensives of 1941 and 1942, and the Soviet counter-offensive of 1944. A whole sub-section covers Finland's war against Germany, waged in September and October 1944.