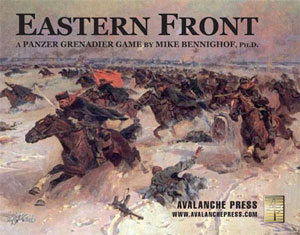 On 22 June 1941, German, Romanian and other Axis forces launched a surprise attack against the Soviet Union. This touched off the most vicious war the planet has ever known, as millions of men (and sometimes women) fought fanatically in a war of annihilation that ended only when the Red Army of Workers and Peasants planted its banners on the Reichstag in Berlin.

Eastern Front is a game based on the opening year of this intense struggle, with 112 separate scenarios based on the actual battles waged in the Soviet Union during 1941.

The game is the crown jewel of the Panzer Grenadier game series, portraying the leaders, infantry and tank platoons and artillery batteries deployed during the campaign. In terms of wargame play value, Eastern Front is packed with exciting fun. The 660 playing pieces include the troops and weapons of the Soviet Red Army, the German Wehrmacht and Romania’s Armata Romana from 1941. The fearsome T-34, the Hammer of the Proletariat, is present along with Germany’s PzKw IV and Romania’s inadequate R2. German commandos, Soviet tank-hunting platoons, Romanian cavalry, and more make for a varied spread of pieces. The eight mapboards represent typical terrain found in the Soviet Union, and are placed together in may possible combinations to form the playing surface.