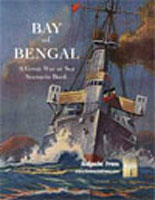 From the late 18th to the middle of the 20th century, the Indian subcontinent was perhaps the most valuable overseas possession of the British Empire, commonly referred to as “the brightest jewel in the Crown.” Defense of the critical trade routes connecting this jewel to the other reaches of the Empire and Great Britain herself fell primarily to the ships of the Royal Navy's Indies and China Station squadrons. While the surrounding waters of the Indian Ocean were essentially a “British Lake” by the early 20th century, during the Great War German raiders still made several daring forays into the Bay of Bengal and Arabian Sea, successfully interdicting vital commerce and tying down Allied naval resources.

Bay of Bengal is a 64-page book supplement for the Great War at Sea series that examines naval conflict arising in and around the northeastern part of the Indian Ocean, as the British attempt to defend the trade routes and ports of their colonial prize from enemies historical and hypothetical. Nine battle and twenty-one operational scenarios examine situations ranging from the adventures of the famous German raider Emden to pre-dreadnought era battles against rival colonial powers, and on to possible later conflicts with the Japanese feared by some members of the British government.

This supplement contains no pieces or maps, but requires ownership of Mediterranean, Cruiser Warfare, Jutland and Pacific Crossroads as well as the operational map from Second World War at Sea: Eastern Fleet to play most of the scenarios, while Plan Gold and U.S. Navy Plan Red are needed to enjoy them all.