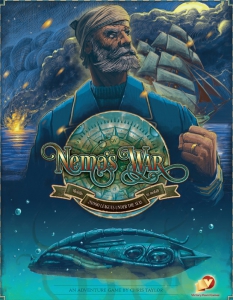 Zulus on the Ramparts!, from designer Joseph Miranda, is the battle cry of those defending the Mission Station at Rorke’s Drift. It is 22 January 1879, and the British invasion column moving into Zululand was disastrously defeated that morning at nearby Isandlwana. Now, fresh troops from the victorious Zulu iMpi (army) are advancing on your position. With your 140 British soldiers and auxiliaries, you must survive the repeated attacks of 4000+ crack Zulu warriors.

Weeks on board the ship have taken their toll on me; I haven’t been this light since I was a boy and I can barely stand up even now that we’re on solid land again. Despite that, the view from this beach is amazing; I never imagined anywhere could be as wonderful or wild as this new world. Our journey inland begins tomorrow and all of my men are showing their nerves tonight. My hope is a good rest will grant us the strength to make our claim and return home someday soon…

In Old World New World, from designer Aaron Smith, you take command of explorers trying to find their destiny in a recently discovered land. The map is revealed as you play against up to three opponents, with each of you trying to shape the land to best benefit your own side. With player-controlled events such as Barbarians, Tornadoes, and Bribery, no plan goes unhindered and anyone could find themselves mapping their own destiny.

Perfect for both new and experienced gamers, Old World New World has a great mix of simple mechanics and a variety of options that will keep you on your toes no matter how many times you play it!

s of Siege game puts you squarely in command of the desperate defense. As events unfold and heroes emerge, can you build up the barricades and fill the breaches before the camp is overrun? As the Zulus relentlessly charge, wielding their deadly spears and as British rifles overheat, can you keep cool and make the command decisions necessary to hold your position and repel the onrush of fierce braves until the Relief Column arrives?

The Battle of Rorke’s Drift saw more Victoria Crosses awarded than any other before or since. Can you write an equally glorious page in history as you confront these Zulus on the Ramparts! ?