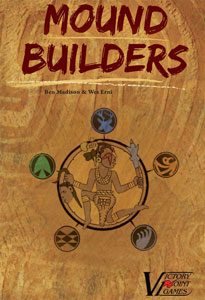 Mound Builders, from Wes Erni and Ben Madison, is a solitaire States of SiegeTM game where you represent the two largest pre-Columbian Indian “mound builder” cultures that dominated eastern North America from before the time of Christ until the coming of the European colonists in the 17th century. Your empire represents the earlier Hopewell culture and the later Mississippian culture that derived from it.

Until the arrival of the Spanish late in the game, you will expand your control across the map of North America, extending it over the various chiefdoms encountered and incorporating them into your economic and religious sphere (“empire”). Your domain will grow and shrink, but be aware that rather than a military advance and retreat, this process represents the rise and decline of culture, religious ideology, and an economic way of life, threatened from outside by competing ideologies and lifestyles as much as by hostile armies.

Your goal is to extend Mound Builder culture and amass as many chiefdoms as possible before rival native powers (and the smallpox-ridden Spanish!) rise up to drive you back to your Mississippi River heartland and extinguish your vast capital city at Cahokia, Illinois.