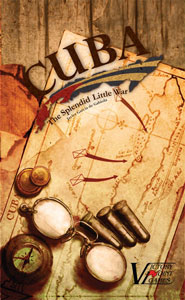 Based on a design by VPG first-timer Javier Garcia de Gabiola, Cuba: The Splendid Little War puts you in the shoes of either the Spanish Empire, fighting to retain your dominion over Cuba, or the rebellious Cubans, looking to throw off the shackles of Spanish dominion. Lurking in the background is a rough-and-ready United States, pondering whether or not to intervene. If Hearst and his newspapers have their way, they will!

While US intervention means the odds fall in favor of the Cubans, if US entry occurs, the best the rebels can do is achieve a solid draw – they’ve traded one hegemon for another. As such, the Spanish player may find that the surest way to avoid defeat is to encourage a US intervention! Deciding how close to the line to go with US intervention, and if or when to cross that line, is just one factor both players need to be mindful of throughout the game.

As the Spanish player, can you maintain control of the island and keep the economy going? Or, as the Cubans, can you stop the Spanish efforts and gain your independence? Play Cuba: The Splendid Little War and find out!