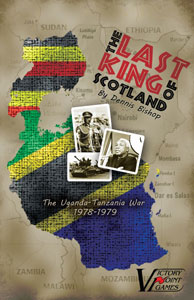 The modern wars in Africa provide a rich arena of different and unique gaming situations beyond WWII in North Africa (where most wargames have concentrated their examination of wars in Africa). Some of these wars were short affairs of a few months, while others raged for twenty years or more. Each of these modern Af

rican wars shaped the political and military future of the continent and they are still finding their way into today’s headlines.

The Last King of Scotland, by designer Dennis Bishop, simulates the Uganda-Tanzania War of 1978-1979 that ousted Uganda's President for Life, Idi Amin Dada. With a seeming fascination for all things Scottish, Idi Amin referred to himself as the “uncrowned king of Scotland.” When Amin fled Uganda, in a sense he truly became "The Last King of Scotland."