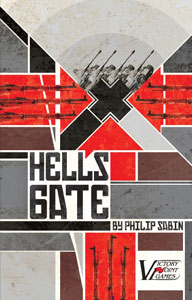 Hell’s Gate is a simulation game of the Battle of the Korsun Pocket in the Ukraine, during January and February of 1944. Two players direct the German and Soviet forces as they seek to capture or regain territory and inflict losses on the opposing side while minimizing their own losses. The simulation is also easily playable solitaire for those who wish to study the dynamics involved.