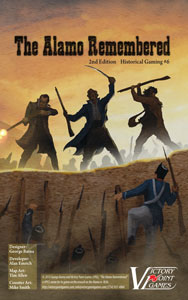 In 1836, Americans -- who since the early 1800s had been migrating and settling in the Mexican territory of Texas -- along with the Mexican locals (Tejanos), were attempting to establish an independent republic. Seized early in the revolt against Mexican authority by these Texians (as these American-led revolutionaries were called), the Alamo Mission in San Antonio was surrounded and besieged by the forces of His Excellency, Don Antonio Lopez de Santa Anna.

The Alamo Remembered, from designer George Barna, is a quick, one- to two-player historical game covering those dramatic minutes when legends were made at the Alamo. In this game of bluff and counter-bluff, command the Texian or Mexican units, defending or attacking the walls of the Alamo.

With no dice rolling, rules to cover many variable conditions during this historic assault, and a “Last Stand” climax to the game, the birth of Texas is yours to relive. As the Texians, can you hold out at the Alamo to the last, or as the Mexicans quickly breach the walls for glory? Find out in The Alamo Remembered!