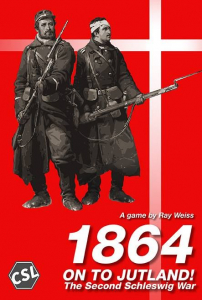 1864: On To Jutland covers one of the 19th century’s least known conflicts, a brutal struggle for Schleswig and the Jutland peninsula as Denmark attempts to retain her holdings in Germany. The game is a quick playing, no-frills simulation which uses an odds-based Combat Result Table and Artillery Fire Table with a d10 roll to process combat. Headquarters can allow units to stack at greater limits and provide a little fog-of-war. Finally, a what-if option allows for Swedish intervention on the Danish side, as they had prepared around 30,000 volunteers to do so but it never came to fruition.