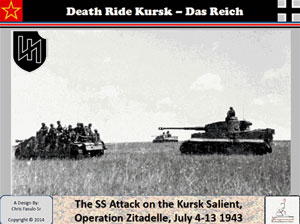 DRK-Das Reich is the capstone game for the DRK-IISS game set. That is the final game in the 3 game set. This game builds on the first 2 in the set, DRK-Totenkopf and DRK-Leibstandarte. This game focuses on the Das Reich sector of the southern part of the salient. After a good start and rapid movement this sector of the front became quiet. Das Reich, from 8 July, did little in the way of attacking. DRK-Totenkopf, at a minimum (and DRK-Leibstandarte is recommended), is required to play this game. The game system features the representation of units at Platoon and Battery level for the Germans and Company and Battery level for the Red Army. The Command and Control and Fire Support Enhancements are built into this game, just as they are for DRK-Totenkopf and DRK-Leibstandarte. The Command and Control Enhancement provides Company sized replacement units for the Germans and the representation of communications between HQ (the concept of Radio Line of Sight is used) and the HQ ability to respond on its own initiative when commo is bad. The Fire Support Enhancement provides for artillery unit missions of Direct Support, General Support, and Reinforcing fires. This helps to restrict the fire of artillery in the game to something more like what happens in real life. Artillery cannot be gathered from around the map to support attacks or defense engagements. It must be planned.

Both of the previous 2 games start the battle from 9 July. This game does that and also provides a battle start, along the entire IISS front, from 4 July. The same game design features, from DRK-Totenkopf and DRK-Leibstandarte, are included in this game.

There are 22 scenarios included. These include the Das Reich scenarios for 9-13 July plus a couple of smaller regimental scenarios, and daily scenarios for each day from 4-8 July for all 3 divisions. A real action packed monster.

In this box are: