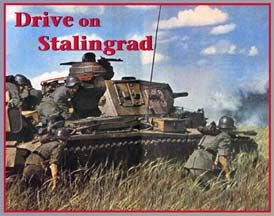 Drive on Stalingrad, The Road to Ruin is a two-player, low-to-intermediate complexity, strategic-level simulation of Fall Blau (Operation Blue), the German attempt to conquer Stalingrad and the Caucasus area of the southwest Soviet Union in 1942. The German player is on the offensive, attempting to win by seizing key areas on the map. The Soviet player is primarily on the defensive in the first scenario, but he is also given the chance to run a full-blown counter-offensive in the second, "Operation Uranus," scenario. Game play of the main scenario encompasses the period that began with the Germans' launching of "Operation Blue," their offensive toward Stalingrad and the Caucasus on 28 June 1942. That scenario ends on 15 September, after 11 weekly game turns. The second scenario starts on 19 November 1942, with the launching of the Soviet "Operation Uranus" counter-offensive, and continues for six weekly turns to the end of December, when historically the German attempt to free their encircled 6th Army at Stalingrad ground to a halt. Each hexagon on the map represents approximately 16 miles (26 kilometers) from side to opposite side. The units of maneuver for both sides are primarily divisions, along with what were actually similarly sized Soviet tank and mechanized "corps." Air power is represented abstractly. Each full game turn represents one week.