Waterloo: The Fate of France 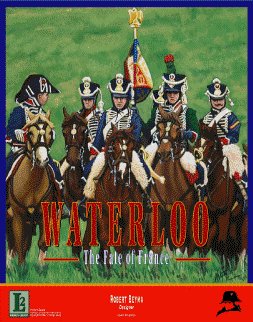 Waterloo: Fate of France depicts Napoleon's climactic battle against the Allied armies gathered at Waterloo, June 16 through June 19, 1815. This is a beautiful game printed on high quality paper throughout.

The units are 5/8" counters. Types include infantry, cavalry, artillery, horse artillery, and leaders. Sizes are divisions and brigades with step reduction.

There are three one battle map scenarios: Quatre Bras (an introductory scenario that can be played in 60-90 minutes), Ligny (2-3 hours), and Mont St. Jean (3-4 hours).

The Campaign game runs from the morning of June 16 to the afternoon of June 19. There are three 5 hour day turns and one night turn per calendar day.