Accueil > Wargames > Moments in History > All Quiet on the Western Front? 2014 edition

All Quiet on the Western Front? 2014 edition 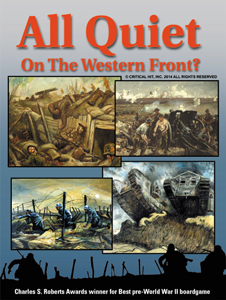 THE WESTERN FRONT, 1918: After more than three and a half years of bitter struggle, Russia had signed the “treaty” of Brest-Litovsk with Germany on March 3, 1918 - thereby leaving the war. The German Oberste Heeresleitung (OHL) now suddenly saw a chance to end the war with a Siegfrieden. However, speed was necessary. In the West war-weary France and Great Britain were strengthened by fresh troops from the USA. Therefore Ludendorff decided to attack in the West as soon as possible. On March 21, 1918, the Germans attacked the British in Operation Michael, “The Kaiser’s Battle”. It was hoped to crush the British Expeditionary Force and drive them back to the channel. Afterwards, France would have to sue for peace or be beaten, too. Of course, the Entente had its own plans as well.

All Quiet On The Western Front? offers a fresh look at one of the most important and mobile campaigns of World War I. You are either in the position of Ludendorff, hoping to crush the Entente and win quickly before American forces will arrive in strength in the front-lines: or Foch, first trying to stop the inevitable German offensive and later push the enemy back from French and Belgium soil until the German High Command has to accept an armistice The mechanics of All Quiet are relatively simple, letting the players concentrate on the most important features of the campaign. As expected, tanks Stosstruppen, command control, trenchlines, and artillery barrages are all included. Of course, with the whole Western Front presented, you do not have to attack the British in March as the German player. Wouldn’t it be wiser to smash the French in the Verdun front bulge?

The Designer: Ted Raicer, often called “Mr World War I”, is a four times winner of the Charles S. Roberts Award, the industry’s equivalent of Hollywood’s Academy Awards. The new rulebook has a color cover in heavy stock and is updated with errata and clarifications to create a new edition.

à A BRAND NEW rendition of the classic map with larger hexes!

à This rules booklet with Designer’s Notes and historical commentary