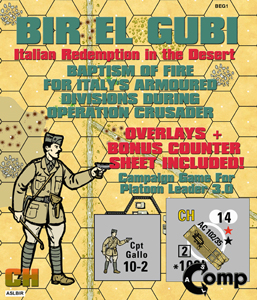 Bir el Gubi is a cross-roads on the Trigh el abd and the route from el Adem to el Guasc. It was the location of a fierce struggle during Operation Crusader, a deployment of armor the British hoped would rid them of Rommel's aggression in the Western Desert and end the seige of Tobruk. It would not come to pass, partly due to unanticipated Italian resistance. British historian Richard Humble stated the following about Italy's performance during Operation Crusader, "…Crusader should be remembered as the battle in which the Italian army can claim to have recovered its self respect". Bir el Gubi served as an unexpected redemption in North Africa for the maligned Italian Army.

Includes overlays and one countersheet