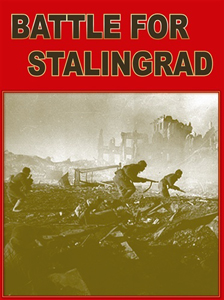 In the autumn of 1942, 14 German divisions of the Sixth Army and Fourth Panzer were poised to attack the vital city of Stalingrad. Facing the German forces were dozens of divisions and brigades of the Soviet 62nd Army. For seven weeks the Germans would hammer at the city in a seesaw conflict for control of the Volga River.

Battle for Stalingrad simulates the campaign that would halt the German drive to the east in the Soviet Union. The playing map represents the terrain in and around Stalingrad, and the colorful playing pieces reflect the sizes and strengths of the opposing military units. Their movement, positioning, and engagement for battle are regulated by a superimposed hexagonal grid, which functions like a chessboard's squares.