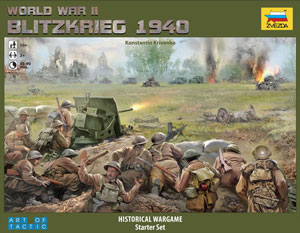 In 1940, the German Wehrmacht shocked the world with their masterful execution of a revolutionary style of warfare, dubbed "Blitzkrieg". The United Kingdom hastily deployed her forces in a desperate attempt to halt the German advance. Now you can re-create the intense battles between the British and German forces in the opening days of World War II!