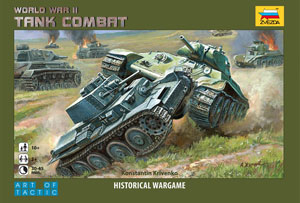 Tank Combat takes place in the war-torn steppe of Eastern Europe as the mighty mechanical behemoths of the German Wehrmacht clash with those of the besieged Soviet Union during the tense fighting of World War II.

Two players or teams take command of a squadron of tanks, represented in the game by exquisitely sculpted models, painstakingly researched for historical accuracy.

The Art of Tactic uses a unique simultaneous hidden order system that keeps all players engaged at all times—just like real combat! The six tank units included in the game each comes with its own “unit card” that clearly displays all the combat abilities of the unit and a list of all the orders that it can execute. Players mark their orders directly on the unit card using the included wet-erase markers—which can easily be cleaned before the next turn. Since the orders are written simultaneously and in secret, the key to victory is to outguess, outwit, and outmaneuver your opponent’s every move!