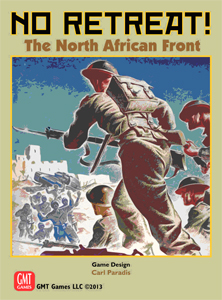 Following on the success of No Retreat: The Russian Front, where the Russian Front of World War II beckons, Victory Point Games' dynamic duo of game designer Carl Paradis and his trusty developer Alan Emrich have teamed up again to present the second chapter in this game series, No Retreat: The North African Front. This time they take the gaming action to the African Front, from the start of Operation Compass on 8 December 1940, through 1942 to the eviction of the Axis from Libya.

Building on the notion of a card assisted game and death-or-glory victory conditions, No Retreat: The North African Front offers a narrative game rich in the feel for the ebb-and-flow of the campaign, wrapped around an exciting maneuver and combat system that harkens back to the glory days of classic wargaming, but includes all the modern features and plenty of innovations. Unlike other North Africa wargames, there are 5 "mini-maps" located at the various termini of maneuver in the campaign, and where battles are waged as fascinating "mini-games" in their own right. Players try to sweep each map and force the action onto the next one in an effort to push their opponent out of the game.

The looming Malta factor is accounted for most assiduously. While abstracted into many aspects of the game, players must always be mindful of Malta being made active (helping the Allies) or inactive (assisting the Axis). The Italian forces have their rightful place in the story unfolding on the game board, and the remarkable paucity of units turns every counter and hex into the kind of wargaming puzzle reminiscent of the glory days of those great contests from the Avalon Hill General magazine.

The use of Supply Point markers, received in a fast, hassle-free way, to seize the initiative, replace losses and recover shattered formations, to light up a map and begin operations there (i.e., conduct player turns on it of maneuver and combat), and then to continue those player turns for another round. Each additional round of player turns must be paid for by another Supply Point, usually spent by the side that feels it is advantageous to press on and keep the opponent hard pressed, recreating simply and effectively the lulls and starts in battlefield operations that were a signature of this campaign.

The desert lies before you and World War II is at stake. You must endure and prevail under the most surprising and grueling of circumstances, for there is No Retreat!