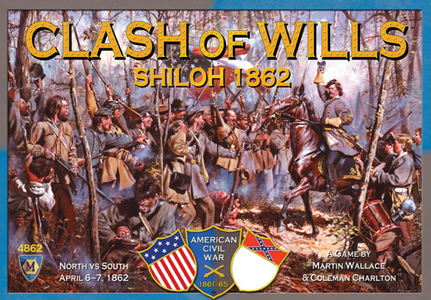 It is near dawn on April 6th, 1862. The first major clash of arms in the western theater of the American Civil War is about to commence!

In Clash of Wills: Shiloh 1862, you and your opponent each control one of the opposing armies. As the Confederate player, you open the battle with a devastating surprise attack on the Union camps around Shiloh church. If you can rout the disorganized blue coats and take Pittsburg Landing before reinforcements arrives, you can deal a potentially fatal blow to the invading Yankees. As the Union player you must survive the initial onslaught and hold back the advancing rebels on the first day of battle. Then, the next day, you can deploy your full forces to crush this latest threat to the survival of the United States. Whose will prevails?