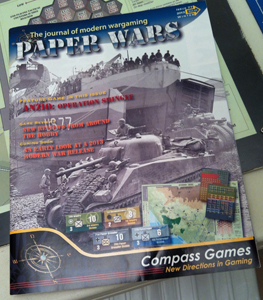 ANZIO is a new game from designer David Murray about the 1944 battle for Anzio, from the initial landings on 22nd January to the failed German offensives to eliminate the Allied beachhead by 1st of March.

The game features historical military units of regimental and brigade size, with some selected battalions, portrayed uisng rectangular counters. Oversized hexes allow for deployment of units on the map in defensive or attack frontages. Units deployed in a defensive frontage straddle two hexes while those deployed in an attack frontage are placed within a single hex. Both players have army and divisional assets, plus Tactical Tokens at their disposal. Tactical tokens and their use on a Combat Grid provide a unique battle resolution system that will keep players active in combat whether they are the attacker or defender. This unique combat system is the standout feature of the game, compelling players to think tactically during the combat.

Anzio will have 2 countersheets and 1 map.