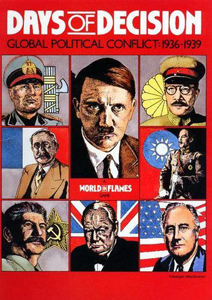 Days of Decision (DOD) is Australian Design Groups' strategic level game of the politics and conflict leading up to the Second World War. Two to seven players each manage the economics and conduct the political and military operations of one or more of the Major Powers involved.

Days of Decision consists of 2 games in 1. The standard 1936-1939 game requires not other components than those provided in this game. It is played on the map of Europe and the Pacific and uses an abstract combat system to represent the conflicts occurring in this period. The 1936-1946 Grand Campaign Game require World in Flames to be used in conjunction with Days of Decision to resolve the military conflicts. Finally, there is also a World in Flames mini scenario of the Spanish Civil War which requires some components from World in Flames.