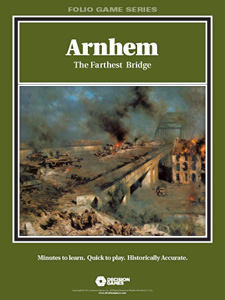 In September 1944, Operation Market Garden was intended to open a direct path for the Allied armies to circumvent the West Wall and threaten Germany's industrial Ruhr heartland. British, American and Polish airborne forces were ordered to assault and capture key bridges along the main highway leading through Holland, the Arnhem bridge being the most distant of them all. Unfortunately, the Allies had gravely underestimated the strength of German forces in the area; so, when the airborne forces landed, they found themselves scattered amid an SS panzer division. The various bridges thus became the fulcrum of the entire operation for both sides.

Arnhem utilizes the new Fire & Movement combat system that's designed so players can augment their units with "support fire" during the course of the turns. From mortars to self-propelled artillery, units can receive support assets to engage enemy positions and formations, allowing combat to develop at all levels. A single recon battalion, for example — perhaps supported by tanks — could be tasked to assault a lone enemy paratrooper battalion defending a landing zone. As that attack gets underway, however, the recon battalion may find itself strafed by enemy fighter-bombers. More support will be necessary to take the landing zone, but assets are limited.

In Arnhem, the attritional design of the new Combat Results Table simulates the true nature of battles in Europe. Units are typically two-sided formations that can incur casualties, accurately replicating the realities of combat and the high losses sustained by both sides during the actual fighting for Arnhem. Winning the battle is thus a matter of maneuver, firepower and asset management.