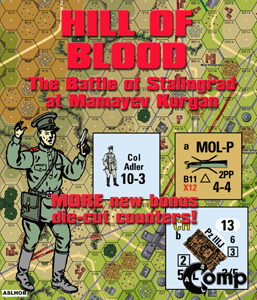 MAMAEV KURGAN, STALINGRAD, RUSSIA, 27 September 1942: Acknowledging the damage done to his army in assaulting the southern and central sections of the city, General von Paulus had systematically reconfigured his forces for a fresh assault. Two shock groups were formed, with one consisting primarily of the 100th Jäger Division, whose task was to clear and control Mamaev Kurgan, followed by an advance into the Tennis Racket and the Bannyi Ravine and finally to occupy the Krasnyi Oktiabr workers' settlements. Paulus' counterpart, General Chuikov was well aware of these preparations and had planned appropriate spoiling attacks, though he was unaware of the fresh German reinforcements. His attack was disrupted before it could even begin, with waves of Stukas strafing his advancing forces. His strongpoint on the crest of the burial mound was destroyed. Bombs and artillery cut down the attackers, decimating their ranks and allowing the following German advance to gain ground. The jägers advanced two regiments abreast and captured the western slopes, but initially failed to take the southern slopes. The 227th Jäger Regiment's vigorous assaults, supported by intense artillery, destroyed the Russian ability to hold on. The Germans would secure the summit that evening (though some bypassed remnants would harass the Germans on the southern and western slopes for the next few days). By day's end, the 95th Division retained a foothold on the northern and eastern slopes of the burial mound, but was down to only 400 effective fighting men.