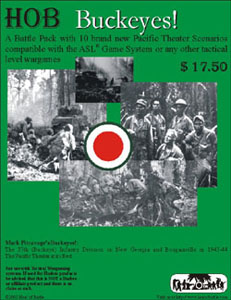 The fanatic Japanese attack resulted in a slim but dangerous penetration. The Japanese 23rd Infantry Regiment had captured several strategic positions on the crest of Hill 700, including seven pillboxes, and had moved light and heavy machineguns into the American trenches and pillboxes. Now the Japanese were in position to put fire on theAmerican supply routes beyond the hill. The Japanese would have to be thrown off the hill — the only question was how.

On the morning of March 9, the Buckeyes launched several scattered counterattacks with no results. At noon, the 145th Infantry made its first major effort, sending elements of two battalions up the hills with tank support. However, the tanks could not operate on the hill and the Buckeyes could only seize a few pillboxes. Air and artillery bombardment, including point blank fire,could not dislodge the Japanese. At 1700 on March 10, the two battalions attacked again, making some progress, but on March 11 the Japanese counterattacked, taking another pillbox at heavy expense. The 145th’s commander, Colonel Whitcomb, was relieved for “extreme battlefatigue”.

The American assault on New Georgia was spearheaded by the 43rd ID, with the Buckeyes of the 37th ID in reserve. The 43rd ID, as untried as the 37th, ran into difficulties in its drive towards Munda Airfield and began to fall apart. The 37th ID was committed in mid-July. However, in addition to stopping the American advance, Japanese General Noburo Sasaki sent infiltrating units to cut the Munda Trail, which served as the tenuous U.S. supply line from the far away beachhead. One group of Japanese hit the rear-echelon defenders of a supply and ammo dump at Parachute Drop, defended by the newly arrived Ammunition and Anti-Tank Platoons of the 1st Battalion, 145th Infantry.