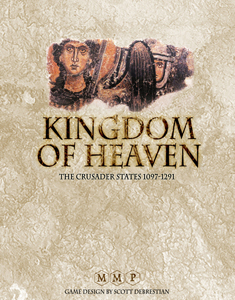 The year is 1097 A.D. After a grueling march across all of Europe and Asia Minor, fifty thousand Christian knights, squires, and pilgrims had reached the Taurus Mountains and looked down upon the plains of Syria. They were about to embark on a campaign that would reshape the Middle East for two centuries and affect the relationship between Christians and Muslims to the present day.

Kingdom of Heaven is a two-player card-driven game that allows the players to experience the great campaigns in the Middle East between A.D. 1097 and 1291. Nine different historical scenarios pit the greatest commanders of the age against one another: Nur ad-Din, Richard the Lionhearted, Saladin, Frederick Barbarossa, Louis IX, Hulegu Khan, Baibars, and many others.

Each turn represents one year, and the scenarios range in length from the 3-turn First Crusade learning scenario to the 7-turn assault of Baibars on the faltering ramparts of the Crusader States.

The game emphasizes playability, and every scenario should be completable in a 3-4 hour evening. Complexity is approximately the same as Wilderness War by GMT or Shifting Sands by MMP.

The game has one 22"x34" point-to-point map depicting the eastern Mediterranean from southern Turkey to Egypt, 110 cards (including special cards unique to each scenario), a rule book, scenario book, and approximately 500 counters.

Designed by Scott de Brestian, Kingdom of Heaven is being developed by Neil Randall with graphics by Mark Mahaffey and Niko Eskubi.

Nine scenarios cover all the major campaigns of the era, from the First, Second and Third Crusades to the Mongol invasion and the rise of the Mamluk Empire. In addition to the ‘basic deck,’ each scenario adds different cards representing historical events unique to that campaign. Turns are yearly, and most scenarios can be finished in 3-4 hours.