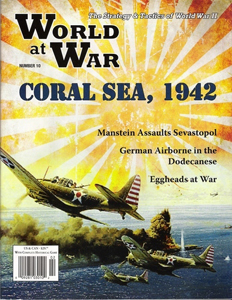 Coral Sea Solitaire (CSS) is a purpose-designed one-player wargame covering the aero-naval battle that took place between the US and Imperial Japanese Navies in May 1942. It was the first of the Pacific War

CSS is based on the game system used in World at War number three Solomons Campaign; however, there are significant differences owing to the smaller scale of this operation and the systemic necessitates inherent in a solitaire design. The player controls various US and Allied forces; the game system controls Japanese forces. The player may utilize his forces as he pleases within the structures of the rules, while Japanese forces are moved and fought by the

Historically, US strategic intelligence was good in terms of identifying Japanese forces and their intentions. Consequently, the player will have a certain edge over the IJN insofar as he will have a general knowledge of the location and objectives of major IJN task groups. That

The game map shows the Coral Sea and adjoining waters, islands and bases as they were in 1942. Each hexagon on the map represents 75 miles from side to opposite side. Each game turn represents 12 hours. Each aircraft strength point represents from six to 24 aircraft, depending on type and pilot quality. Naval units represent one ship for carriers, battleships and heavy cruisers, and two or three ships for other units.