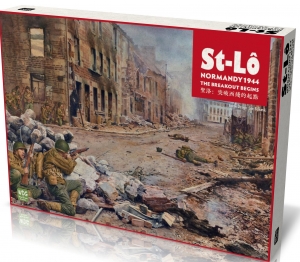 This is Joseph Balkoski’s design from West End Games brought up to date with new rules and MUCH improved artwork. Players have 5 infantry divisions to work with, improved Victory Conditions favoring the Americans (the original game was not as balanced as it should have been) and an updated order-of-battle. Joseph is the retired Historian of the 29th Infantry Division which is the key Allied unit in the game – he literally wrote the book on its history in in Normandy during World War II. The Germans have a Luftwaffe Division as well as regular infantry. See what it is like running 5 Divisions in World War II and that is the real charm to the game.

St. Lô marks the return of a true wargaming classic by Joseph Balkoski. St. Lô simulates the key town where the Allies would break out from the Normandy beachhead. First published in 1986.

Solitaire Suitability: 6 out of 10

Time Scale: 24 hours per turn with a variable number of rounds

Unit Scale: Battalions & companies made up of HQs, infantry, assets, artillery and observation posts. Some off board assets.

Players: one to four, best with two

One US Division display sheet

One US Artillery display sheet

One Game Box and Lid