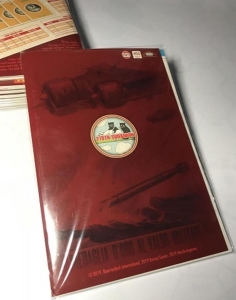 278 Squadron “the same 4 cats” is the solitaire campaign card game of SM79 Damned Hunchback, the cardgame from Lumaca Games. The player is a pilot of the Italian famed Squadriglia 278, the so called “the same 4 cats” (I soliti 4 gatti), which flew the Italian SM79 torpedo bomber during IIWW, scoring several torpedo hits despite the technical difficulties. Through 10 mission the player must score hits, fix its plane and survive and receive the most important Italian Medal: the Gold medal to the Military Valour!

—description from the rulebook

63 colorful cards, a A3 game mat and English rules wait for you in this narrative card war game!

The game components are several cards which must be divided into decks to be set up on the map; the cards are the core mechanic of the game.

The player puts on the map the Damage Card (for the SM79, or for a more challenging experience, for the SM84) and the Experience Card at Value 0 or without value on the top.

The decks to set up are: Campaign deck, Resolution deck, Target Ship deck and Mission deck.

Campaign deck (yellow back): it is composed by the Mission cards; the player draws a card per Mission from this deck where it is shown the Mission to be accomplished by the pilot. It shows the geographical area, the number of Target Ship to draw and the type of Cards to add to the Mission deck. If the player manages to hit the Target Ship, it can receive a Reward (cards with white back), as per Reward Chart.

Resolution deck (red back): it is composed by Hit and Missed cards and it is formed by a number of these cards depending on the Resolution Draw Chart. It is the engine of the game: it is used for AA draws, Torpedo draws and Damage draws.

Target Ship deck (green back): it is composed by all the target ships available in the game and these are historical ships hit by the Italian SM 79; every card shows the type of ship and the number and type of Cards to add to the Mission Deck; some of them indicates a Special Decoration that the player can earn in case of successful attack to that Target Ship.

Mission Deck (blue back): it is formed by a certain number and type of Event Cards plus the ones indicated on the Mission cards, on the Target Ship cards and on the Experience Chart. The player must draw a maximum of 7 Event Cards, indicating the distance from the Target Ship, a card per turn and resolve it, following the instructions indicated. Then it can decide to continue the Mission or abort it or try a Torpedo Resolution Draw, trying to torpedo the Target Ship chosen!

The player reads the Mission Card drawn where it is shown the Mission to be accomplished. It shows the geographical area, the number of Target Ship to draw and the type of Event Cards to add to the Mission deck. The player must choose a single Target Ship and put it on the map, in the dedicated area.

The player should try to hit the Target Ship with its Torpedo.... it is not so easy!