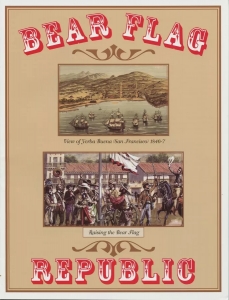 Bear Flag Republic is a card-enhanced game for 2 players based on California in 1846-47 at the time of the Mexican-American War. The game map shows most of California (known as Alta (upper) California. The owners are Mexico & the Californios or Californians). The object of the game is for the Californians to retain Alta California while the goal of the Bear Flaggers and United States troops and sailors is to seize the soon to be Golden State. The fighting itself was not particularly bloody and involved relatively small numbers of troops. There are two major events that influence the course of the game. One is the outbreak of the Bear Flag Revolt just before the formal Declaration of War between the United States and Mexico is known of in California. The other is the rebellion of Southern California over the initial occupation by the Americans. The game is a TWO-ACT play. Several key and often-random events may play a powerful role in he final outcome of the fighting. The game will take 1-3 hours to play to completion.