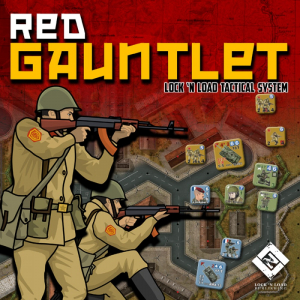 Red Gauntlet is an expansion for Heroes Against the Red Star from the Lock ‘n Load Tactical System. Included are eight brand-new scenarios and a new map (26AM). It features fluid, impulse-based turns, squad-level actions, and individual heroics. The scenarios span the entire length of the war, starting with the first American counterattacks in the Gap and desperate efforts to slow down the Soviet juggernaut. We see Soviet Separate Air battalions landing to clear the way for armored spearheads and vicious ambushes against columns of Soviet vehicles.

There are armored formations clashing outside of Frankfurt. We see the French desperately attempting to hold the Soviets at bay in bitter fighting on the streets of Paris and daring rear area raids on supply depots, and the combined NATO last desperate final attempt to stop the Soviet Black Guards Tank Division from reaching Le Havre, and splitting the NATO line from north and south France.