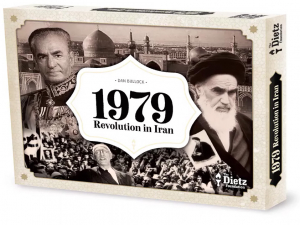 1979: Revolution in Iran is a national-level strategic game covering the events leading up to the 1953 coup, the Islamic Revolution and the turbulent period in between.

You will play as either the Coalition, pushing to nationalize the oil industry and, later, rise to oppose the Shah and remove him from power or as the Royalist, fighting to keep the Shah, Mohammed Reza Pahlavi in power and protect American and British oil interests.

1979 is a card-driven game for two players. Unlike many other event card games, each turn begins with a draft of event cards before alternating action rounds.

Factional influence is each player's primary resource. It is used to trigger events, take actions and most importantly, mount opposition to those in power.

Scoring is not open information, keeping tension front and center from start to finish. Do you have what it takes to change the course of history?