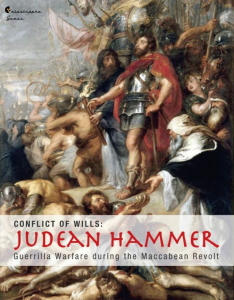 Judean Hammer is a fast-playing area-control game centered around guerrilla warfare during the Maccabean Revolt. Take on the role of the Seleucid Greeks or the Maccabean rebels and battle for control of Judea. All combat is influenced by a single, shared deck of special ability cards. There is only one deck of cards controlling both sides actions, with each card offering a combat advantage or a special event for one faction.

However, this is a “deck-burning game”. Use a card for its special event, and you remove the card and permanently lower your combat ability. This means each player has some tough choices ahead: Burn up your special events early to take a commanding lead, or patiently wait for your opponent to get weaker and then strike with a decided combat advantage.