Accueil > Wargames > Conflict Simulations > 1870: The War Against the Empire 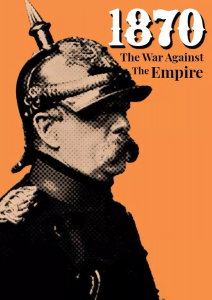 1870 is the first in a new sub-series of games within the 2140 series called the Long Century Operational Series covering 19th century conflicts at a unique operational scale. 1870 covers the first month/phase of the Franco-German war, in which the combined armies of Germany overwhelmed the martial forces of Napoleon III in a lightning campaign of opportunity and maneuver taking only a month to overthrow the Second Empire. 1870 is heavily inspired by SPI’s Wilderness Campaign, Mark Simonitch’s US Civil War and the Great Campaigns of the American Civil War series.

HQs have an ATK Bonus, DEF Bonus, and Movement Allowance

Mechanics covering Leader Casualties, Disruption/Demoralization, Logistics and Command are all included in the game.