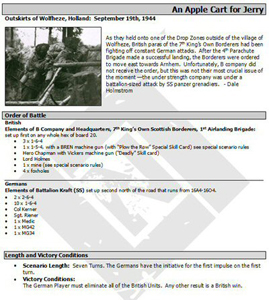 Includes twelve new scenarios on cardstock, just like those included in all other Lock 'n Load games.

Of Mines and Men: While a platoon of Marines supported by Am tracks are patrolling a mine-infested area, they are ambushed by the Viet Cong. Can they vanquish their hidden foes?

Once again, Germans vs Brits on the LnL battlefield.

The Road to Astrachan: An elite German long range reconnaissance group is sent to far reaches of the Caspian Sea, but can it survive a Russian gauntlet as it enters enemy territory?

Fortress Breslau: A mixed-bag of German units bravely defends the beautiful city of Breslau against a Russian onslaught.

Undaunted Courage: On the outskirts of the Nijmegen, American paratrooper John Towle takes on a concerted German counterattack.

In the Ghetto: Refusing to be rounded up for the concentration camps, Jewish partisans defiantly defend their turf from German aggressors.

An Apple Cart for Jerry: British Paras defend a Landing zone outside of Arnhem using some innovative measures.

One Last Blitz for Old Time’s Sake: On Hitler’s orders, a refitted panzer battalion makes a final assault against a Russian bridgehead.

The Brickyard 150: British Paras attempt to open a route to relieve their own at the Arnhem Bridge.

Three Companies at Dak To: A scenario drawn from the pages of the famous Seven Firefights in Vietnam. NVA attack a company of American infantry entrenched on a hill.

Tip of the Speirs: Easy Company of the 506th Regiment, 101st Airborne Division is tasked with taking Foy from the Germans. Their commander falters, and Lieutenant Speirs steps in.

Teamwork: Outside of Bastogne, elements of the 101st Airborne try to mount a coordinated defense against Panzer Lehr.