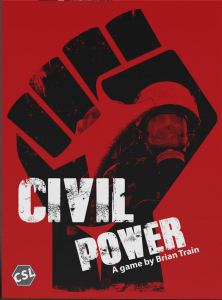 “In this critical hour we don't need love, we need WEAPONS -- the newest and best and most efficient weapons we can get our hands on. This is a time of extreme peril. The rising tide is almost on us….” – Raoul Duke

Civil Power is a game from Brian Train which models mass civil disorder, riots, raids, and other violent urban phenomena. One player will take command of the Police/local authorities while the other player takes command of the Mob. The game is asymmetrical in its means, motives and opportunities: the Police player has discipline, firepower and esoteric technology while the Mob player has outrage, numbers and Molotov cocktails. The Police must manage to contain and subdue the crowd through carefully distributed violence: the right amount will suppress or demoralize Mob forces, while too much will cause casualties costing the police victory points. The Mob player is less constrained but is also aware that a riot is a temporary thing.

Scenarios are included for several types of situations: riots (including a five-day Chicago 1968 campaign and a three-player Belfast 1975 scenario); raids (featuring a skirmish by the Berlin Wall); and gang warfare (including the 1992 Los Angeles riots, a Crip-Blood gang war, and a 1944 Warsaw Uprising scenario). There are enough examples supplied that players will easily be able to design their own scenarios, inspired by the headlines of today and tomorrow.

Brian Train was inspired to design this game after reading “The Police Chief”, a particularly savage article by Hunter S. Thompson writing as “Raoul Duke, Master of Weaponry” about the inadequacy of equipment in the police armory to deal with civil disorder. We hope you, animated by the Spirit of Gonzo, will take the chance to explore his take on modern urban violence.

“When the going gets weird, the weird turn pro.” – Raoul Duke