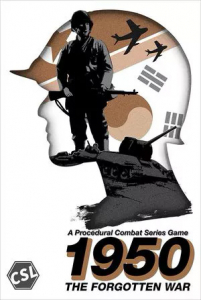 1950 is the second game of Conflict Simulation LLC's 2140 series, and the first of their Procedural Combat Series of games, historically accurate, sophisticated, playable within 2 hours and no more than 140 counters.

1950 recreates the Titanic and volatile struggle for the Korean peninsula in the first major land conflict of the post-WW2 world. Over 100 Random variations of combat chits provide a unique experience with each play-through and cut down dramatically on analysis paralysis. Rules are included for multiple interventions, air-power, and UN supply.

Activations go back and forth with a fixed initiative, creating a unique go-like simulation that recreates the ebbs and flows of the front without railroading players into a foregone conclusion.

Players each action phase can choose to move, strategic move, conduct a meeting engagement, amphibious invasions, or prepared attacks. The main scenario covers the mobile part of the war and with the combat chits, no 2 games can be alike.

Players can spend VPs during combat to absorb losses as well as supplies, or deciding to give up ground or rout.

Players win by driving the VP threshold further towards their side by the end of the game or win automatically by reaching their maximums. Win conditions are based on cities, Pusan Perimeter, and performing historic actions like reaching the Yalu river for the UN or Pusan Perimiter for the Communists.

No two games of 1950 will ever be alike and plays just as well solo as it does with an opponent.