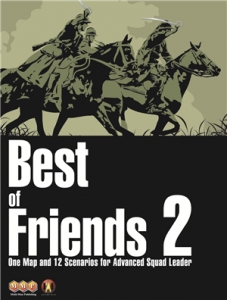 Best of Friends 2 follows 2013’s Best of Friends with 12 more scenarios from the Swedish Friendly Fire ASL Tournament and also includes an 8? × 22? geomorphic mapboard that originally appeared in Friendly Fire Pack 6 and has been repainted here by Charlie Kibler as board 85.

As with Best of Friends, the 12 scenarios in Best of Friends 2 have been updated using official layout and terminology, and in some cases updated for balance. This collection presents a selection of scenarios designed by Mattias Rönnblom, Martin Svärd, Chris Mazzei & Peter Struijf, and Pete Shelling and cover a variety of actions from 1939 to 1945 that feature German, Japanese, New Zealand, Polish, and Russian forces in some of the best tournament-sized offerings available in ASL. We’d like to thank the Friendly Fire team for the scenarios in this pack!

Designed for the aficionado, Best of Friends 2 is not a complete product and assumes the buyer owns the core Advanced Squad Leader game system.