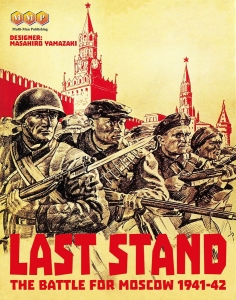 In October 1941, the German Army launched Operation Typhoon - the last major German offensive of the year. In an all-out attempt to defeat Russia and end World War Two, the Germans managed to see the spires of the Kremlin as their high water mark for both this battle and for the war. Over two million men fought in this desperate battle that would decide the war and the future of mankind.

Masahiro Yamazaki, the designer of the MMP games Red Star Rising and Stalingrad Pocket has designed his greatest game on this great conflict- Last Stand; The Battle for Moscow 1941-1942. Using all the tricks in his designer’s bag, Mas has made this titanic struggle playable but without sacrificing a great sense of history. Offering 3 scenarios to show different aspects of the campaign, and a unique way of showing the plight of the Soviet morale as a nation faces possible complete military defeat, all in a manageable size, Last Stand is a game that has no competitor.

As seen in Mas’ other games, Last Stand features an interesting sequence of play:

) German Reaction Phase (Like the Soviets in his reaction phase, but with different parameters, the German player may conduct reaction move with his eligible Mechanized units).

In addition, the game features unknown unit strengths for the Soviet Units, variable and shifting victory conditions, Soviet Army morale breakdown, German variable supply consumption, and of course, substantial weather effects as General Winter arrives as a reinforcement for the Soviet cause.

Perhaps the most unique aspect of Last Stand is the Victory Conditions. As the game begins, neither player knows what they must accomplish to win the game. As the game progresses and the Germans advance towards Moscow, the Germans will find out what it takes to win. Soviet Morale will continue to fall until the Soviets can strike back - and when they do, the damage is healed twofold - but defeat can happen at any moment.

Last Stand features three scenarios of different lengths to give players options depending on how much time they have to play.

Scenario One - the Soviet Counterblow

This scenario covers only the great Soviet Counterattack that pushed the Germans to the brink of defeat in the late Winter 1942. Playing time is about 3-4 hours.

This scenario covers the German attack to defeat the Soviets before winter comes. Playing time is about 5-6 hours.

This scenario covers the entire offensive and the Soviet counterattack. Combining both scenario one and two together, this has a playing time of about 10 hours.

Game scale: Units are divisions, turns are ten days, and hexes are 17.2 kilometers across.