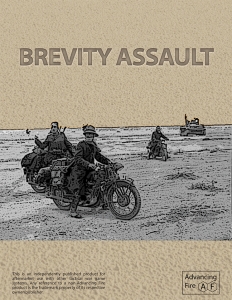 BREVITY ASSAULT contains an Operational Level that permits to play a larger scale battle than other campaign games available for ASL. Basically what you get is a game at company/platoon level where you solve the combat not with simple dice rolls but with ASL scenarios. BREVITY ASSAULT depicts the hard fought battles that occurred in mid May, 1941 on the border between Lybia and Egypt during the so called "Operation Brevity".

One 13.2” x 10.2” operational map which represent historical situation on the Lybia/Egypt border

One 31.7” x 23.2” HASL map sheet which represents the historical layout of the village of Sollum

Ownership of the following Hasbro/MMP ASL products are required to play all of the included scenarios: Beyond Valor©, West of Alamein©, Hollow Legions©