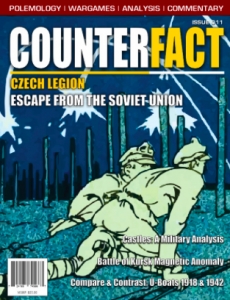 The Kursk Magnetic Anomaly & Its Effect on the 1943 Battle

Issue 11, Czech Legion: A solitare game on that elite unit's escape from the nascent Soviet Union just after WW1 by Javier Romero

The Czech Legion: Escape From Russia, 1918-19, is a purpose designed solitaire wargame by Javier Romero covering of the operations of that legendary formation as it moved across all of Asia to escape the nascent communist state. During play, the player, commanding the Legion, must secure control of most of Siberia to create an escape route while also attempting various other missions, such as rescuing the Czar’s family or the gold reserves of the Russian Empire. The Legion and its allies (White Russians, Western powers) are commanded by the player; the opposing Red Army is run by the rules system. Each turn represents from one month; units of maneuver are battalions and regiments and their ad hoc equivalents; map features area-to-area movement. Playing time is about three hours; complexity is low-intermediate. Also included on the issue’s counter-sheet is a half-sheet of Mercenary units for optional incorporation into the play of America Falling.