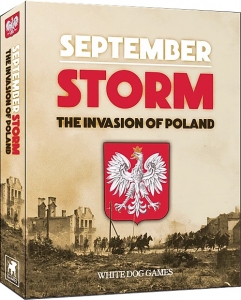 September Storm: The Invasion of Poland is a solitaire war game of the September 1939 German invasion of Poland, which signaled the start of World War II. The game covers the period from September first to the 17th when the Soviet Union invaded Poland from the east. The player controls the Polish side and rules marked “solitaire” control the German side. The game can also be played as a two-player game.