D-Day Sword Beach: On to Caen 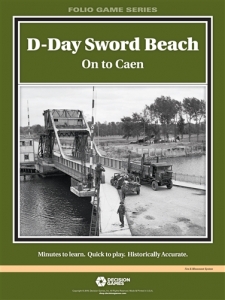 The D-Day folio series consists of four separate games, each portraying a portion of the Normandy campaign area. Turns represent two to three days each; the games cover the campaign from the initial landing to the breakout. Each game comes with one map covering a portion of the battlefield at 2.5 miles per hex. The playing pieces represent the regiments and special battalions taking part, plus the multitude of fire support available to them.

The series uses the Fire & Movement system rules, with exclusive rules for each folio. The folios can be combined to display the entire American or British Commonwealth sectors, or into a single giant game on the entire campaign.

The British landing on Sword Beach, combined with the airborne landings was designed to guard the eastern flank of the bridgehead and ensure the capture of the crucial road junction of Caen. The initial landing is made from both air and sea, but will run into the heart of the German Panzer reserve. Caen was the cork in the Allied bottle and the Germans made every effort to halt progress on this front. In the campaign game, the Allies can — as they did historically — use threats on Caen to keep German forces away from the rest of the front and ease the progress elsewhere.