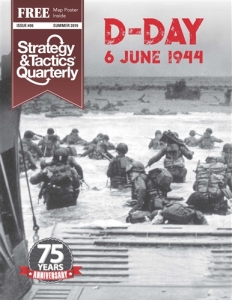 D-Day: 6 June 1944: The 1944 invasion of Normandy is unique in military history, being the only invasion intended to put an army ashore for the purpose of conquering a continent. That story is told here in great detail, beginning with the plans and forces deployed by each side for a clash both knew was coming. The Germans were scraping the bottom of their manpower barrel, resulting in a mixed bag of units, some elite, others scarcely able to defend a stretch of the coast. US and British Commonwealth units came ashore in nearly equal numbers, though that would change rapidly as British strength was waning while the US Army was waxing. The invasion day itself is examined beach-by-beach, unit-by-unit, but always with an eye on the bigger picture. Maps and images support each part of the story. Final chapters cover the ensuing battle for the beachhead and the breakout into central France. A map poster is included depicting the entire invasion on one side and a detailed order of battle for all Allied forces on the reverse.