In the Trenches: Devil Dogs 2 - Faith and Sacrifice 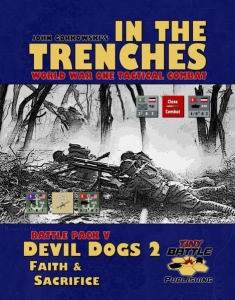 Relive some of the major Marine battles fought after The Battle of Belleau Wood. This expansion covers four additional engagements, each with two "What if" alternatives, in the long and storied history of the United States Marine Corps and the sacrifices they made. The Marines were involved in retaking towns, breaking heavy German defenses and holding the line at a farm that stopped the German advance on Paris.

IN THE TRENCHES (ITT) system makes its return and expands on the battles of the US Marines with four hard fought scenarios drawn from Devil Dog history, and designed by Jim Snyder (World at War: Blood and Bridges, Flashpoint: Red Storm). The In the Trenches series enables players to game historically accurate simulations of tactical operations from the Great War. ITT challenges players to move and fight with company-level formations made of separate platoon-sized units during five minute, impulse-based turns. The historically accurate maps are scaled to 100 yards per hex. This approach recreates WWI command and control problems and inspires historically accurate play without forcing decisions.

NOTE: This is an expansion to the original Devil Dogs ITT game. You need that for game rules, the Player Aid Card, and some counters in order to play these new scenarios and alternates. Did we forget to mention each of the four operations come with two alternate setups for more action on your table? I guess we just did! That's a total of 12 scenarios.

A non-military issue Ziploc bag to billet your troops

You’ll need to requisition 2 dice from your divisional quartermaster