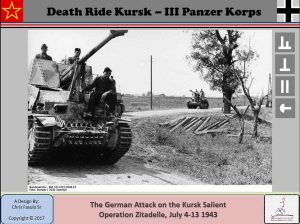 III Panzer Korps: This game is the Base Game for the AD Kempf Game Set.

Scenarios for this game start on 4 July and through 13 July when they failed to meet up with the IISS Panzer Korps at Prokhorovka.

Inside this base game there is a consderably larger amount of material than in past Death Ride base games. The reason is that there are 4 full German Divisions involved and all in one game. That makes this a 2 box set. It will be very worth it though with all those units inside.

III Panzer Korps - Base Game - comes with (in Full Color):

(34) Map Sections of the Donets River Area of Operations